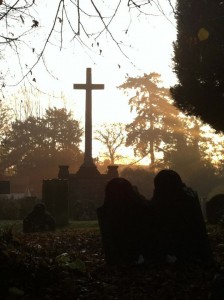 In providing a formal response in 2017 to the application to add West Malling War Memorial to the National Heritage List for England, the following history was researched and we share it here online for everyone’s interest as the centenary of the end of the Great War approaches in 2018.

During the war and the installation of the ‘War Shrine’

Following the outbreak of war in August 1914, from October 1914 onwards the West Malling Parish Magazine began to list the names of local men from the ecclesiastical parish of West Malling serving in His Majesty’s Forces. The original list of 85 names was supplemented each month as men volunteered or (presumably in some cases) came of age).[1]

While the magazines in between make reference to local people ‘lost’ to the war in subsequent months, it’s unclear whether they died or were simply serving overseas and were being described as ‘lost’ to local tasks in the church. The first ‘Roll of Honour’ appeared in November 1915 with H.A. Danes, Cpt S. Philips and F.Hills the first to be listed as confirmed dead. A further list of those missing, believed killed, and those wounded was also provided. [2]

In December 1916, the Parish Magazine carried the following announcement from the Vicar at the time, Rev A.W. Lawson.

“WAR SHRINES
A Picture of the Great Sacrifice with a list of men now serving abroad will be placed (temporarily) in the Church. A prayer is printed on the picture, and a prayer card is provided. It is hoped that people will go into the Church to pray for their dear ones in peril at the front.
The cost of the picture is being met by private subscriptions.
It is also proposed to place a regular war shrine in some public place in the town, for which subscriptions will be asked in due course.”[3]

On January 24th 1917, the Rural Dean dedicated the new Shrine. The first part of the service was held at St Mary’s before a short procession to the Shrine which was fixed on Arundel House on the High Street.[4] The W.I. Millennium Scrapbook in the local library records that the Shrine was essentially a bronze plaque around which flowers and announcements of recent deaths were placed.

The beginning of the ‘War Memorial’

The joyful news of the Armistice was greeted in West Malling by the bells being chimed and a short thanksgiving service was held in the church that night at 6.00 p.m. As Rev A.W.Lawson describes it:

“The Church was crowded, and the attendance of so many was a proof, that they felt it their first duty and privilege to return thanks to Almighty God for His great mercy, in crowning the sacrifices and efforts of over four years of war with triumphant victory.”[5]

In the Parish Council meetings covering the period January 1913-December 1918, a letter was received on 24th November 1918 from the West Kent General Hospital Committee saying that a special appeal for £1,000 for a Memorial Bed (garden?) for ‘our men who had fallen in the war’ is being raised and asking for support. Mr. Apps, Chairman of the Parish Council, proposed that “we should have a ‘Day’ for this fund, the date to be arranged at the next meeting”. At the next meeting on the 4th of December 1918 it was resolved that ‘this matter would be left to after Christmas’. There are no later records in the Archive Library.[6]

On 6 June 1919, a Public Committee was formed at a Parish Meeting to make plans for a suitable remembrance but the first mention of the War Memorial for West Malling itself is described in the July 1919 Parish Magazine (No. 7, Vol XXXI) where the following is written:

“A second Parish Meeting was held at the Boys School on June 25th. A resolution was passed approving and welcoming in general terms Mr Mercer’s endeavour to form a Syndicate for the purpose of building a Public Hall on a site (already purchased by him) opposite Ryarsh Lane and the High Street. After two other schemes were discussed and rejected, the meeting unanimously resolved that the Memorial for the Heroic Dead who have fallen in the War should take the form of a Memorial Cross, with their names inscribed, to be placed in the Churchyard. The following were appointed to form a Committee to appeal for subscriptions and to carry out the Scheme. Messers W.M.Apps, F.J.Allison, C.B.Mercer, R.Leeves, Rev G.F.Prideaux[7], Rev A.W.Lawson, with power to add to their number.”[8]

In subsequent months, a list of the subscribers was regularly printed in the parish magazine. Then it was reported that on December 18th 1919, the Subscribers met. The Vicar was elected Chair and presented a report of the Committee to all present. A sketch plan prepared by the Architect, W.K. McDermott, for the War Memorial was approved. The notes further describe how the Vicar promised to seek a faculty to carry out the work and that Mr Ronald Chittenden generously promised to provide the Kent ragstone required.[9]

By July 1920, plans were fairly clear. The Parish Magazine records that the War Memorial would be a:

“handsome cross of Scotch granite, 14 feet high, standing in the centre of a semi-circular recess hollowed out from the Churchyard wall, which recess will be enclosed with gates. Beneath the cross there will be a bronze shield, with the surnames and initials of those who died for us.”[10]

Rev Lawson applied for the Faculty for the War Memorial on 6th March 1920 and the faculty was granted on the 23rd of the same month.[11] The drawing shows the War Memorial as we know it now with the bronze plaque and ragstone pillars. However, the edifice of the tall grey granite cross in the drawing is probably twice the height of the current cross and suggests that, at some point in the memorial’s history, it was replaced and made smaller.

The Parish Magazine in July 1920 corroborates that a Faculty had been obtained, with the work estimated at that point to cost a total of £550. Sufficient money had not yet been collected and an appeal was made, once again, for local people to contribute.

The ‘War Memorial’ is unveiled

The following description comes from the Parish Magazine:

“Trinity Sunday, May 22nd [1921] will be long remembered as the day when our War Memorial was unveiled and dedicated. A large crowd of people assembled in the High Street and the Churchyard at 3.30 to witness the ceremony, and to take part in the solemn and touching service, in memory of the 47 Malling men who, in the words of the inscription on the bronze shield ‘died for right and freedom’ and who by their heroic death made the great sacrifice to shield our homes from a ruthless foe, and who died that England might live.”[12]

St Mary’s Choir was joined by the Choir of the Free Church (West Malling Baptist) along with a large number of children in uniformed organisations. The memorial was dedicated by Rev Lawson, and Rev Prideaux read out the names of the men commemorated and led the prayers. The Memorial was unveiled by the drawing aside of Union Jack flags by Gen. Sir Archibald J. Murray, G.C.M.G., K.C.B., C.V.O, D.S.O. 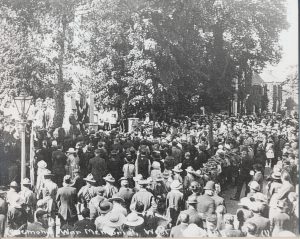 Of the Memorial, the South Eastern Gazette wrote:

“In simplicity and beauty of its design, as well as dignity and impressiveness, the Memorial will be surpassed by few in Kent, if not in the country.”[13]

The Architect was again confirmed in the Parish Magazine as Mr W.K. McDermott A.R.I.B.A, and the Builder was Mr J.A. Davison.

Finally, in the Parish Magazine, the following month of July 1921, the statement of receipts and expenditure was recorded with the final expenditure detailed as £525 0s 7d.

Excerpts from A History of the Parish Church, West Malling
written by Rev A. W. Lawson and Colonel G. W. Stockley
published in 1904.