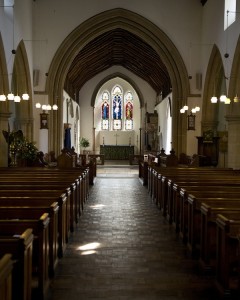 These current proposals to add some fresh facilities at St Mary’s have a long back-story.

As far back as 1975, St Mary’s Parochial Church Council was discussing what to do about the lack of key facilities in the church. Minutes of a meeting held on Valentines Day that year show that Canon Geoffrey Young, the Vicar at the time, was pondering various schemes to provide space for the children, a “concourse area” (as they described it) and a place for meetings and classes within the body of the existing church.

By 2010, St Mary’s were recruiting for a new Minister to replace Canon Brian Stevenson and a survey was carried out amongst the congregation seeking to gain a sense of their priorities for the new Minister. The number one request was for a toilet in the church, following closely by “a warmer church”. While many changes had been made in the intervening decades, fundamental issues of comfort and accessibility were still being keenly felt.

After Rev David Green arrived in 2011, working with the PCC he began to try and address the congregation’s concerns. However what brought those concerns into sharp focus was a set of decisions that had to be made about the Church Centre. The Church Centre did have a basic outside toilet and the Sunday School met in one of the halls, but the Centre was costing the church thousands of pounds each year and St Mary’s didn’t have the significant funds required to repair and upgrade it. In addition, it was a short walk away from the church itself. That was fine in Summer but not so great in the middle of Winter! Over the course of several years between 2012 and 2015, the PCC explored a variety of options for the Church Centre and eventually agreed to seek planning permission to convert the building into residential properties and to sell the site. The sale was completed in 2016 which, in turn, gave the PCC a significant fund with which to address the lack of facilities in the church.

In 2014, while the Church Centre’s future was beginning to become clear, a feasibility study was carried out and we began to assess our options for the church itself, and to draw up a list of what was actually require. Anyone who knows St Mary’s or uses the church regularly will be well aware that the building actively hampers our efforts in various ways:

With our basic wishlist very clear in everyone’s minds, in 2014 the PCC commissioned an initial feasibility study. The study proposed a new building on the south side of the church in the churchyard – separate to the church but connected by a walkway. While the proposals wouldn’t have done anything for the main worship space and heating would still have been a problem, they would at least have met our most fundamental requirements of toilets, kitchen facilities and a space for the children.

In October that year, as we began to consult with key stakeholders including the Diocese of Rochester and various heritage experts, it was Historic England who encouraged us to think again and consider whether our needs could be met by re-ordering within the existing footprint of the church itself. Additionally, they also expressed concern that a hall space for the children in the existing building risked “significant harm to the church’s significance”. That advice set us on a path which led to the current proposals which effectively do a bit of both. On one hand, many of the key facilities are proposed to be provided in the existing building by re-ordering within the main church building. However the proposals also include the provision of a new extension on the south side, in the vicinity of the vestry, which would provide the necessary meeting space for our work with children and young people.