Home / David is made Vicar 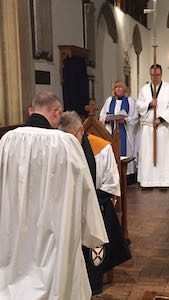 On Thursday February 22nd, St Mary’s was pleased to welcome our brothers and sisters from St Michael’s, Offham and St Gabriel’s, Kings Hill and our Archdeacon, the Venerable Julie Conalty for a special service to ‘induct and install’ David Green as the new ‘Vicar of West Malling and Rector of Offham’.

Regular readers will be aware that, in December, we announced Rev David was to be made ‘Vicar and Rector’ in late January. Unfortunately that service had to be postponed but with Her Majesty’s Letters Patent in hand and able to read aloud in the service, we were finally able to move ahead.

David chose the same readings and hymns that he had at his licensing service in 2011 when he was made ‘Priest-in-Charge’. They provided an interesting mirror image to the service that enabled us to both look back at his six and a half years of ministry here as well as the chance to look forward to all that lies ahead.

The service was led by our new Archdeacon, Ven Julie Conalty who preached the sermon on the theme of unity (you can read the sermon in this month’s Parish Magazine – this link opens a PDF file).

David was asked to renew his vows of loyalty to Her Majesty the Queen and to the Bishop of Rochester and a series of people from our three churches handed David various symbols of ministry and asked him to renew his pledges as a Minister. Perhaps most moving of all were a couple of children – sisters Lizzy and Immy from Offham who came forward to ask David: “Will you in the strength of the Holy Spirit, continually stir up the gift of God that is in you, to make Christ known among all whom you serve?” He promised Lizzy and Immy and all of us that “By God’s help” he would do so.

The Archdeacon of Tonbridge read aloud the Bishop’s licence and then instituted, anointed and blessed David for service in these parishes. As is common in such inductions, David was then taken to the front doors to be handed his keys (a symbol of his stewardship of the care of the buildings), taken to the bells to ring them, thus indicating he had taken up his role, and finally to his priest’s stall where Julie took him by the hand and placed him in position!

Speaking after the service, David was asked if he felt any different. He said “I appreciate it has been important for many different people to see this take place but the job I do on a day-to-day basis won’t change. Perhaps my halo will glow a bit brighter now! Otherwise we simply move forward together with unity of purpose as Julie said.”

For the uninitiated, what’s changed?

When David was appointed in 2011, he was licensed as ‘Priest-in-Charge’ of our parishes. While the job he has done for us in these last six years has been identical in almost every respect to that of a Vicar, this formal ‘upgrade’ in his status as our Minister does give him a better security of tenure in his role, and it represents an important step forward for our parishes.

The difference is largely historical and has to do with money. In the days when Tithes were paid in England someone was entitled to receive that money. Where a church paid that tithe to the Incumbent, he was a Rector. Where someone else got the tithe and they had to appoint someone ‘vicariously’ to lead the churches on their behalf, that person was called a Vicar.