Home / Statement about the future of St Mary’s Church Centre 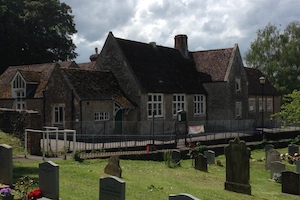 In the month of March, the owners of Betty Lewis Pre-School announced that they would be leaving the St Mary’s Church Centre in West Malling in order to take up residence at the old McGinty building within the environs of West Malling CEP School. Their decision brings an end to a relationship that has lasted through the last few decades in which generations of pre-school children have found a second home and an educational foundation within the walls of our Church Centre.

As well as being Betty Lewis’ effective landlord at the Church Centre, I am also an ex-officio Foundation Governor at West Malling School and so I watched the decision-making process for Betty Lewis with one foot in both camps. Indeed, several members of St Mary’s are also Foundation Governors at West Malling CEP School; one of whom also sits on our PCC. It’s great, therefore, that St Mary’s will continue to have an association with Betty Lewis in the future. We are delighted that we will be able to keep an interest in their progress and that they have been able to find a new home which enables the Pre-School to stay local to West Malling and serve the local children and parents of our community.

In all my dealings with them, Betty Lewis Pre-School has proved itself an outstanding organisation, educator and carer for our young children. They rightly deserve their reputation within West Malling and the surrounding area as a place where parents are keen to send their kids, and I’m delighted that this move safeguards their future and establishes a relationship with our Primary School that should be mutually beneficial for the Pre-School and the Primary.

I mention the future because, for some time, we’ve been aware that the writing was on the wall and the Church Centre’s future was not certain.

When I arrived in the Benefice in 2011, it became very apparent very quickly that the Church Centre was a big issue. For ten years and possibly more, the building had been costing St Mary’s Church a great deal of money. Long-serving PCC members were well and truly frustrated by the whole subject and it quickly spilt over into our meetings. The deficit on the Church Centre each year was always in four figures and sometimes five. With the Pre-School in place and the various rents as they were, the Church was effectively subsidising all the activities that took place there, regardless of whether they were church-based or not, and it was something we could not afford.

Moreover, the building was slowly deteriorating. With Pre-Schools and other organisations rightly held to high standards in their care of children, we were struggling to keep up with their needs for the building and the demands of our current institutional structures – Government, Ofsted, Health & Safety, Environmental Health etc.

Two years ago, Betty Lewis and I spoke about these very obvious issues and the Churchwardens and I have tried to maintain an open and transparent dialogue with the owners ever since. While they were shocked by my honesty and didn’t realise we had such problems when we first spoke, to their immense credit Betty Lewis did respond in a positive way. Their fees for the use of our building have risen to better reflect its use and they’ve pulled their weight by organising a number of activities to renovate and spruce-up and generally help to improve the building’s overall condition. We’re enormously grateful for their partnership and ‘can-do’ attitude.

When West Malling School’s new Language Centre opened, the opportunity came up to make use of the old McGinty Centre in new ways and Betty Lewis rightly saw a big opportunity to safeguard their future in a facility far more suited to their purpose.

While Betty Lewis’ future has been safeguarded, their departure from the Church Centre marks the end of a particular era for our building and questions about the future are now brought into sharp focus.

At the present time, the PCC has had some preliminary discussions about the future of the Church Centre and it seems there are three main options. The first is to renovate the building and make it fit for purpose in the 21st Century. That’s going to take a lot of fund-raising, but it has a lot of merit. Community facilities in West Malling and the surrounding area are sometimes in short supply and whether it’s Parent & Toddler Groups, Lunch Clubs, Fitness sessions, Alcoholics Anonymous, Breast-Feeding Clinics, DIY Baptism & Wedding Receptions, it could be a very valuable space for the future.

Another option is to sell the Church Centre. Doing so would raise a good fund of money which St Mary’s might then be able to use to build facilities either in St Mary’s building itself or as an extension. Toilets, kitchen facilities and meeting space for Sunday School, Youth Group and all the sorts of community activities listed earlier could happen in such a new hall – perhaps on the south side of the church.

Contrary to some rumours circulating in West Malling, no decision has been taken to sell the land for housing. If St Mary’s PCC ever decided to sell (and it is an ‘if’, not a ‘when’), then any planning application to build housing or change its use would need to be consulted on widely. As always, such planning would go through Tonbridge & Malling Borough Council. Residents and other interested stakeholders would have plenty of opportunity to be involved. The fact we’re in a conservation area and the narrowness of Churchfields as an access road would, I’m sure, be very high on the list of issues that TMBC would need to think about.

A third option beyond renovation or sale is a somewhere in-between model. Either selling some of the land to renovate the rest, or working with a developer while retaining ownership in return for considerations.

At the moment, nothing is off the table and nothing is definitely decided. St Mary’s PCC and I need to carefully weigh all our options. As effective Trustees of St Mary’s as a charitable body, we have a duty in law to consider what is best not only financially but with all the aims and objectives of the church in mind.

Progress will also be slow. Diocesan authorities, English Heritage, the Borough Council will have opinions on what we can and can’t do. I’m very conscious too that the Church Centre impacts our neighbours in Churchfields and is also an emotive and important building for many West Malling people who either went to Pre-School there or, prior to that, remember the building when it was West Malling Primary. All that needs to be taken into account.

I’m always interested to hear what people think; there is a sense in which our Church and our Church Centre belong to us all. I’m also interested to hear from people who want to get stuck in and make things happen. Please contact us if you would like to be involved in doing the work. Much work lies ahead but there is opportunity and potential in all that too and that is potentially very exciting.