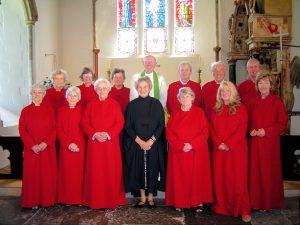 Colin was born on 20 August 1929 in Walthamstow, Essex. At the age of five, he joined the church choir at his local parish church, St Michael Walthamstow, well known for its Anglo-Catholic style of worship. When war broke out, Colin was evacuated to near his aunt’s home at Polperro in East Cornwall and went to school on the train, with its famous reverse loop, from Looe to Liskeard. He was confirmed at the clifftop church of Talland.

On leaving school he began work in Barclays Bank and indeed spent all his working life there. He was Assistant Manager at the branch in Langham Place, near All Souls Church. One of his customers was Benjamin Britten who congratulated Colin on his courteous service when Colin supplied him with a Barclaycard at very short notice. Finally he was appointed Manager at the Bexleyheath branch. He was much sought after as a Treasurer; at Wrotham Church, the R.N.L.I. and especially the Garden Tomb Association which involved many trips to Jerusalem. He was pleased that the Rochester pilgrims visited in 2000.

He had hoped to be a professional cricketer and had trials for the Essex county team after the war but was not selected. He may have been a partner with Trevor Bailey but he was delighted that the great Essex batsman Alastair Cook was also a gifted singer and that Essex were county champions in 2017 and 2019. As one door shut at the cricket, so Colin turned to his other major talent – singing. He was a great asset to so many people and groups. He loved singing the solos in Mendelssohn’s Elijah, Handel’s Messiah, Stainer’s Crucifixion and so many other great works. His singing of The Advent Prose was magnificent. When he worked in the City of London he was much in demand to deputise at St Paul’s Cathedral Choir and the City Churches, especially St Clement’s Eastcheap. At St Paul’s he proudly wore Maurice Bevan’s cassock. Bevan’s tune ‘Corvedale’ to There’s a wideness in God’s mercy is now very popular. In Opera he sang Escamillo in Carmen at The Queen Elizabeth Hall. His ‘Toreador’ would have been powerful. He often sang at birthday parties, Livery Company Dinners and in Church Choirs. 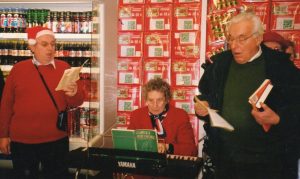 When Audrey Attree was interviewed for the post of organist at St Mary’s, West Malling in 1997 we didn’t realise that we would obtain Colin as well. He brought new people into the choir and enlarged the repertoire and started annual concerts which were the forerunners of The Music at Malling Festivals established by Thomas Kemp and Alan Gibbins in 2011. It was a privilege to hear his wonderful voice – his entries always correct, holding the notes to the right length and providing wonderful colour and tone in the sound. His leading in Haydn’s Seven Last Words was a devotional treasure. He and Audrey were a great team in their marriage and music. They retired from their roles at St Mary’s in the summer of 2013.

Colin died on Sunday the 1st of August 2021 and we mourn the ending of a life with many talents, enthusiasms and kindnesses, a maestro in many fields. Our thoughts and prayers are with Audrey and the children and grandchildren at this sad time.